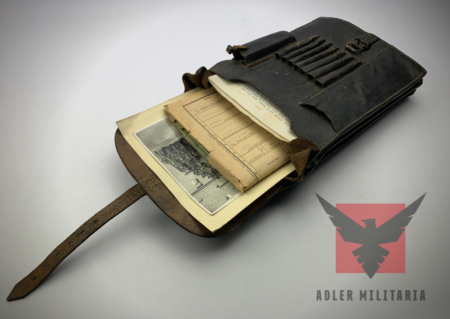 Map Case: Standard Issue, no broken leather. Could be used on display. Signs of wear.

Contents: Uffz Cmiel suffered a serious wounding in Southern Russia an explosive round destroyed his right hand. It was so bad that he lost his lower arm. The contents go into depth on his war injury. Various Documents are official Wehrmacht documents and correspondence about his wounding and later discharge. A total of 15 Pages, all are official statements and assessments made by the Wehrmacht.  Includes are two different hand typed German Army marching songs.

Photos: Note on the portrait he is wearing an Officer Grade Visor and Tunic with modified NCO Shoulder Boards. Completely non regulation. The other photo is a grouping of NCOs, which looks to be at a NCO School.

Grenadier Regiment 406 – at the time of the wounding were in Southern Russia.