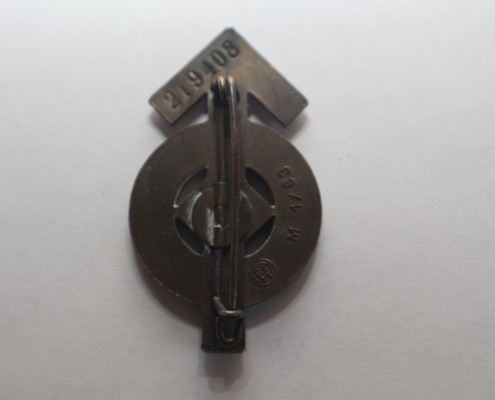 Hitler Youth proficiency badge that would have been awarded for the successful completion of a series of tests measuring physical and ideological proficiency, rated according to the Leistungsbuch [identity document and performance book]. The tyr-rune [arrow shape] represents the warrior god Tyr. The Hitler Youth was founded by the Nazi Party in 1926 to shape the beliefs and actions of German youth to conform to national socialist ideology.

After Hitler’s selection as Chancellor in 1933, this became the national ideology, and loyalty to the Nazi Party and its leaders was a central teaching. The Hitler Youth was a pathway for service in the armed forces or, later, in the SS. In 1936, membership in Nazi youth groups became mandatory for all boys and girls between the ages of ten and seventeen.

A nice condition medal, often seen on combat uniforms of young men! They were allowed to wear it for a time on their Service uniform! This is nicely maker marked RZM. Its also numbered to the specific person.