Noss joined the Waffen SS in 1944, he was after a short training sent to his frontline unit with the 18. SS-Freiwilligen Panzergrenadier-Division “Horst Wessel” –  he was specifically assigned to the Panzer-Aufklarungs Abteilung 18. Then to the Panzerjäger (Tank Hunter Troop)  Interestingly, Noss was assigned a Schwimwagen at times and even wrote how it nice it was to drive it. By November 1944, Noss was in positions not far from Budapest and the day he was killed he noted in his SS diary that they knocked a KV1 Tank out. His items must have been taken from his body when he was killed.

SS diaries filled out are extremely rare, and a source of information on the specific unit that is impossible to find anywhere else.

Begin trip to Riga, Latvia at 16:31 – Training begins on Tuesday.

With the transport to Obesce (ÓBECSE now in Serbia – this was the meeting point for the Horst Wessel Div) to Aufklarungs Abteilung 18, over the Duna (river).

The entries follow on for the next days, detailing rivers and cities crossed, such as Vienna to Budapest. Noss states the full journey town for town, till May 31st. He also notes that they traveled there with 30 other soldiers.

Fired Live – in a small competition he lists the scores.

Amazing lunch – meat filled dough, sauce and potato salad and pudding. So much!

Recruit training comes to an end. Sent to the Panzerjäger (Tank Hunter) troop as a messenger.

Alarm to make ready! 2000 to the train station, at 0100 meeting with the train with the antitank guns.

Bomb damage in Budapest is quite bad.

On watch – looking for aircraft.

On Watch – for aircraft. Arrived in Stanislau (Ivano-Frankivszk – Ukraine) loaded of the train and slept in a barn .

During the drive, attacked by two Soviet aircraft, no losses.

Vehicles unloaded in motorised march. The rest of the Company is loaded on.

1100 drive further towards the front. 1430 In a small village behind the front, unloaded. The evening preparing.

Built Bunker. Ready by midday. Any amount of rain and muck.

(?) Drive with Obersturmbannführer – Any amount of Butter, cream, bread, marmalade, …

Afternoon diving bombing attacks from Russian fighter and bombers, also firing from wing mounted MGs. In the troop two are wounded, one in the company is killed.

Weapon inspection. Fighting in the air, with Soviet fighters. Two ‘Iwans’ shot down. Getting ready for infantry actions. Infantry attack enemy counterattack on the village with antitank help.

1130 Attack begins. Strong Russian artillery fire and firing not far from us. Village taken. 1900 moved back.

In a village through the night and day. Any amount of milk, 9 eggs fried. 2200 secured the area against partisans. 0530 – March.

Various entries about money, food, killing a cow and pig for food and preparing it all and driving…

Through Skola, Attack of a Russian aircraft with on board machine guns. In the mountain valley.

Still here in Eger (Hungary) Attack from Russian bombers, with bombs and onboard machine guns on the rail bridge and train station.

Many entries not front related till.

With the truck and Schwimmwagen searching for deserters!

In the night, searching for enemy paratroopers!

With the Pak (AntiTank Gun) firing live. Around 60 rounds of AntiTank and 20 shots of explosive.

Through Budapest in motorised March.

Loaded in Bicske (next three days on the train)

Arrived in Rimaszombat, unloaded. Small town 3KM from the Slovakian border). Slept in park with barracks and beds.

Offer of halt to hostilities from Hungary to the Soviet Union. With the Pak drove to the positions (Honoed-Base, train station and place to stay) Secure against Partisans.

Röttenführer Hummer’s birthday. At 1920 evening with the comrades from the Pak team. As a guest, Knightscross holder Sonne. Any amount to eat and drink. 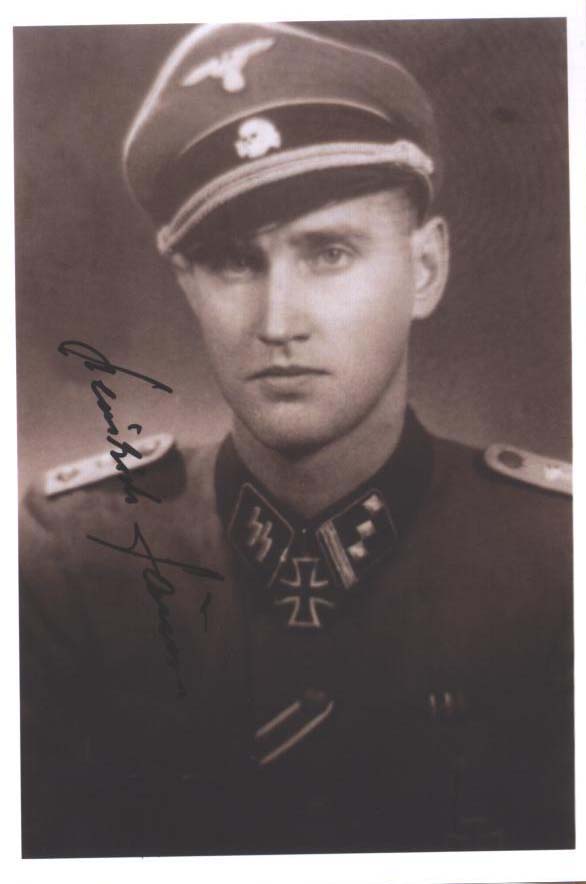 Drive to fight partisans. Returned to the base. (From the 18th till the 31st the division was fighting against the Slovakian National Uprising).

Morning at 0600 drive to fight partisans in Slovakia. Entered positions in a village. Artillery falling close to us.

Unterscharführer von Kalben – Birthday. Great drive with the Schwimmagen. Celebrated the birthday, any amount of cigarettes!

Drunk – with the Commander and Company Adjutant etc.

Small party for 9th of November. Left at 1000 to battle. Evening stop, slept.

Morning at the exit of the village. Can hear heavy Russian ‘drum fire’…

Morning, Russian break out, with tanks and infantry close to the village. Moved back to Hatvan. Slept in a hospital. (Hatvan – Hungary, 60 KM from Budapest).

In Hatvan. Russian aircraft attacks. 2 Payments received with my post as well as stamps for Christmas.

Till 0200 in the night security, retreating movements. 3Km … to the position. Evening, back to Domy then slept. Searched for the Company. Still only with one cannon. (Domony – small village 20KM west of Hatvan).

Drove to the Company. 0500 stopped on the Rolbahn and slept.

Moved into positions 1KM behind the main frontline in winter positions. Its raining, enemy aircraft above. Built bunker. Only with one cannon…  23 T34 (Soviet Tanks) – 300M in front of the line.  Russian Infantry 500m in front of our position. Cannon knocks out a tank Model KW1.

This is where the story of the young Waffen SS recruit Noss ends, on the rear of his photograph the text.

Oswin Noss is mentioned in the German Volksbund Website, he has a grave in Hungary.

The division was holding the lines near Hatvan on the road to Jaszbereny – around 60 KM from Budapest. There is a farmhouse there and there was heavy battles in the area due to an important cross road intersection.