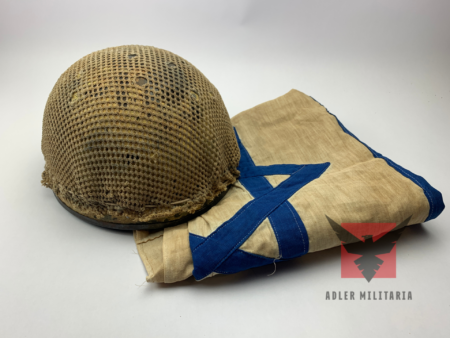 This came directly from Israel to our stock room. A very iconic helmet as the units issued these took Jerusalem after bitter street fighting in the Old City. It was found with a handmade Israeli flag of vintage construction that is also part of this sale.

Condition is Medium/Salty, as expected the harsh conditions of the desert are not suited to such items. But it remains a silent witness that displays very well.

Interestingly, there is parts from a US M1 Swivel Bail

A rare opportunity to add a rather rare helmet to your combat helmet collection.

Price includes shipping in Europe and the USA.

Watch a Battle Synopsis of the 6 Day War Now…

War on Three Fronts (Survival of a Nation)