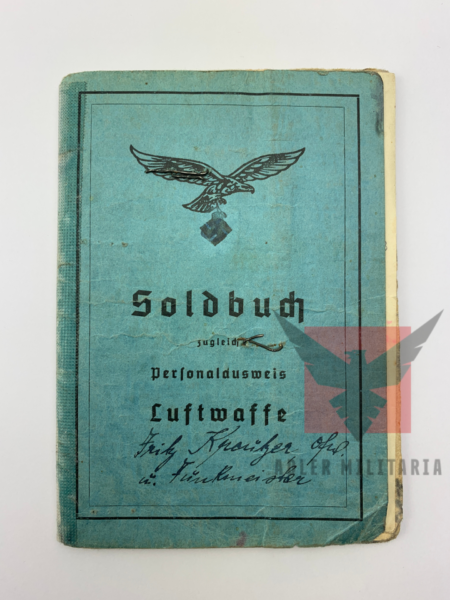 Kreutzer was born into a Protestant family on the 16th of June 1914 in the area of Heiligenwald in the former Eastern Prussia. Kreutzer was a Sales Man by trade and was married.
Soldbuch Issued – 2nd Issue – 17th of September by Luftnachrichten Regiment 38.
Kreutzer was a master radioman, adorned with the rank of Feldwebel Funkmeister. (Sergeant – Radio Master).
Kreutzer served from 1.5.1942 – 2.12.1944 with  Luftnachrichten Regiment 38, ending the war out with the rest of Luftwaffenkommando VIII.
Injuries or Wounds: Kreutzer arrived on the 22nd of February 1942 in Hospital due to a bomb splinter hitting his left upper leg. Returned to his unit around two months later.
Late 1942 Kreutzer’s unit was attached to Kampgruppe von Heinemann. Under Major Lothar von Heinemann. KG Heinemann went into action on the famous Soviet Tatsinskaya Airfield Raid in 1942. The most important airfield only 260KM away from the city of Stalingrad. It was the 6th Armees most important airbase, and the Soviet Army mounted a raid against the airport in late 1942.
See More on the Battle: https://www.stalingrad.net/russian-hq/the-tatsinskaya-raid/the-tatsinskaya-raid.htm
According to historian Robert Forczyk, in his book: Red Christmas: The Tatsinskaya Airfield Raid 1942. (Osprey 2012) Page 29.
”Kampfgruppe von Heinemann was the largest blocking force, made up from both left over Flak unit at the men of Luftnachrichten Regiment 38: 200 Men, 6 x 8.8cm Flak, 12 x 2cm Flak.”
Locations of Luftnachrichten Regiment 38
Equipment: Issued a full set of uniform and equipment in May 1944, including a Summer Uniform. Also a Issue Pocket Lamp.
Weapons: Issued a Pistol Model 37, 7.65mm. MP40 Sub Machine Gun. On the 30th of November 1944 he was taught how to operate a Panzerfaust by the Wachkomp of Oberkommando des Heeres Gruppe A. Extra Paper: Mastloch Sprengschein, this is a permit for the blowing of holes for large antennas (Issued March 1943).
Awards:
1. Sudetenland Medal (1.10.1938)
2. War Merit Cross 2nd Class with Swords (15.3.1942)
3. Black Wounds Badge (10.4.1942)
4. Eastern Front Medal 41/42 (18.8.1942)
5. Ground Assault Badge of the Luftwaffe (29.9.1942)
Issued a Führerpaket on the 3rd of November 1943 on his way home for leave. On the 26.11.1944 Kreutzer was sent home for 10 days, as his house was destroyed in a bombing raid.
Kreutzer survived the war after a short stint in hospital just before the wars end on the Elbe in late 1945.
Categories: Documents - Soldbuch, Wehrpass, Urkunde, IDs, Shop