Loah was born on the 3rd of July 1915 in Hamburg into a protestant family. His Soldnbuch was issued on the 20th of September 1939. Loah was at the time a Wachtmeister indicating prewar service in the Airforce.

Loah would begin his service in the air after serving as ground forces in the Leichte Flugabwehrgruppe Wangernooge. Although by December 1940, Loah would take to the skies. In April of 1941, he was assigned to:

This special unit was specifically used for taking photos at a height of over 9000 meters. By 1943 it was renamed as:

Known as a special and secret aviation unit, responsible for the overseeing and development of the latest secretive weapon systems. The First Staffel, of which Oblt Loah was a pilot, would frequently make long distance recon missions over the Mediterranean, England and parts of the Eastern Front. Other Staffels undertook special missions for the RSHA, such as dropping of agents! It is stated that because of the nature of the missions that each Leutnant or Oberleutnant had the powers of a squadron commander. Secrecy was paramount, airfields were disguised and they operated under special code names.

It would seem that in a Russian Archive has Loahs Flugbuch, and in a very informative article on Loahs unit he is mentioned.

What was the goal of 1./ Aufklärungsgruppe ObdL on the Eastern Front?

Here a mission overview of the Spy missions over the USSR before the invasion.

The crews were required to take photographs with overlapping images so that there would be no “blank spots” on Soviet territory. In addition to planned photos, the command demanded perspective images in good quality.  Thus, the entries in the flight book of the observer Lieutenant Wolf Loah (Lt. Wolf Loah) from 1. (F) /Ob.dL indicate that on June 12, his crew made two sorties on a “normal” reconnaissance aircraft over England, and on June 20 participated in two espionage missions over the USSR.

The spy plane used for the espionage missions was a Do 215 (only 105 ever built), the aircraft was adorned with civilian style marking in order for the Soviet pilots to directly assume its a hostile aircraft, although some incidents did occur. 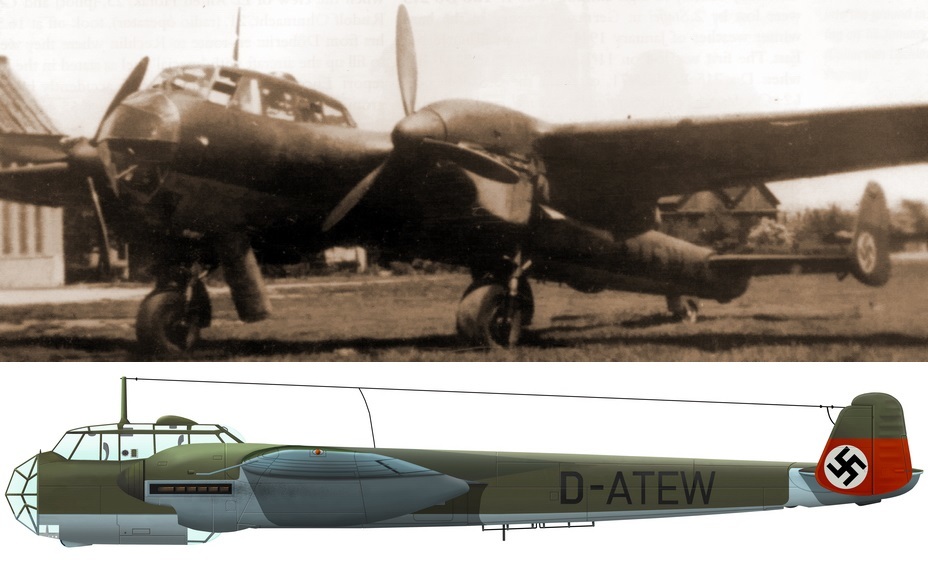 Interestingly, “The masks have been dropped, the war with the Soviets has begun! Dornier Do 215 from 1. or 2./ObdL, photographed June 22, 1941. With a few strokes of the brush, the spy planes turned into ordinary reconnaissance aircraft: the Luftwaffe cross painted over the civilian D-ARED airborne code is visible” 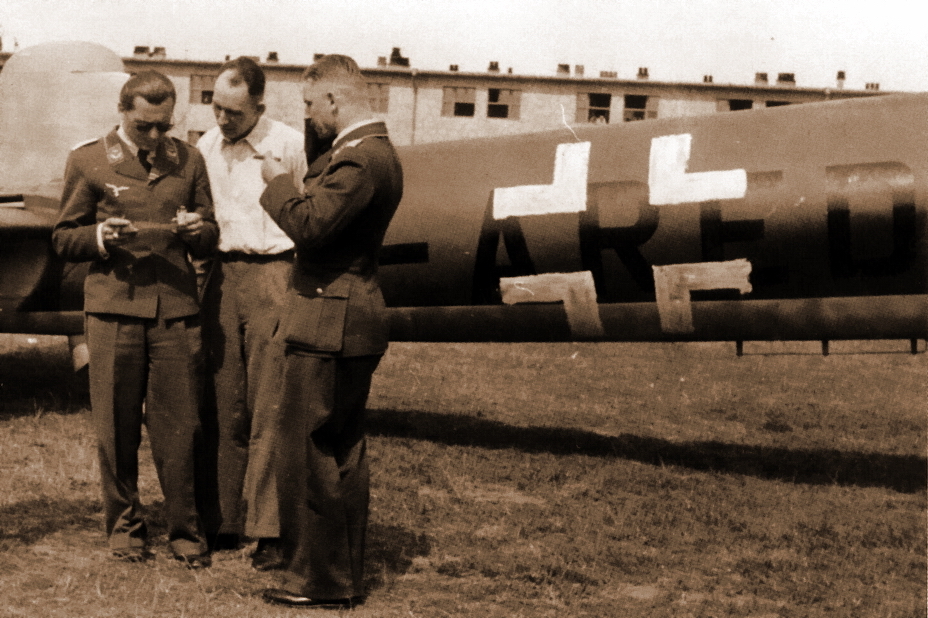 The unit is the focus of a very detailed book,  “The Luftwaffe’s Secret WWII Missions – By Dmitry Degtev, Dmitry Zubov

By 1943, Loah now an extremely experienced Observer and Pilot, adorned with the Golden Clasp for Reconnaissance. Was assigned to another obscure and important unit, the:

They were tasked with testing new planes, as well as captured aircraft and have been the subject of an informative book. “Colonel Rowehl’s Flying Eyes: The Secret German Aerial Reconnaissance. By Dr Norbert Rohde. “This book reports and documents events of explosive political and military importance, most of which were carried out on the basis of secret commando matters. With a few exceptions, the military operations described here were not mentioned in any of the Wehrmacht reports.” From what I was able to find out Loah was flying some rare aircraft on special missions as well as test flights.

In March of 1944, it Laoh was shot down in an extremely rare Arado 240 T9 GL , (only 14 ever built) over Eastern Prussia. The details of the mission are unknown, it seems that Loah made it out of the aircraft and returned to the German lines safely. Interestingly, the same aircraft was flying over England a few weeks earlier at 10,000m high with a pressurised cabin. This was not the first crash Loah would experience. Below, the crashed Ar240 T9 GL, also a model of the same aircraft that Loah crashed. 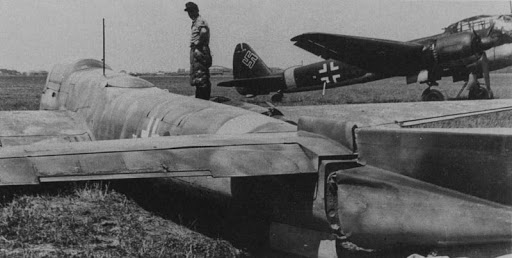 According to a few online sources it would seem that Loah was the pilot of a Ju88 T-1 which crash-landed at Oranienburg (28th of August 1943)  due to motor failure. Loah was badly wounded in the crash his Soldbuch records the wounds as burns of the 3rd degree and he would spend till November 1944 in recovery, it was likely this crash that he has damaged his Soldbuch.

The unit is covered in depth in these books:

By 1945, Loah was assigned to one of the most interesting and advanced areal units of the entire war as an Operational Officer.

Sonderkommando Hecht formed on November 1944 and transferred, 28 February 1945, at Campoformido, near Udine, North East Italy, for reconnaissance missions over the Italy occupied by the Allies. Afterwards the Unit was nominated Sonderkommando Sommer from the name of his new commander, Oblt. Erich Sommer, a well-respected test pilot.

In November 1944 the first bombing specimens were evaluated and framed in specially constituted units: the Sonderkommando Hecht and Sperling. The bombing missions required sophisticated techniques, since the crew consisted only of the pilot, and could take place with horizontal flight or dive. In the first case, the use of an automatic guidance system was envisaged, used while the pilot was carrying out the aiming manoeuvres of the target. For dive bombing missions, however, the pilot still used the periscope mounted on the roof of the cabin for aiming.

The Ar 234 B-2s took part in the famous Ludendorff Bridge bombing mission at Remagen over the Rhine in March 1945 .

The Sonderkommando Sommer had aircraft: Ar.234B-2b, Wn.140344, fuselage code T9+EH piloted by the same Sommer and equipped with a pod Magirus with two 20mm cannons and ammunitions, Ar.234B-2, Wn.140142, code T9+DH (former SM+FB), pilot Lt. Gunther Gniesmer, and Ar.234B-2, Wn 140153, code T9+HH (former SM+FM), pilot Stabsfw. Walter Arnold. From the base of Campoformido the three jet was often deployed on other Northern Italy’s airfield: Verona-Villafranca, Osoppo and Lonate Pozzolo well camouflaged under the trees and often disguised with false wooden propeller in front to the engines.

The Sonderkommando Sommer make about twenty missions, the first date to 15 March 1945 over the harbor of Ancona and San Benedetto del Tronto, in front to the Adriatic Sea, two day later was make a flight over the Leghorn’s harbor, Pisa and Elba Island. In the same month the Sonderkommando Sommer flew again over the Ancona’s harbor and Leghorn’s harbor and over Perugia. On 25 March Sommer make personally the first of two long-range missions: from Campoformido to Lonate for refueling and from here over the French harbor of Toulon and Marseille. The second Sommer’s long range mission date to 27 March: a reconnaissance over the Corsica and Elba Island overflying Leghorn’s harbor on the return. On 29 March taking off from Lonate the Arnold’s Arado was strafed and damaged by Spitfires, but the first loss, and the only in combat, occurred on the afternoon of 11 April 1945 when the Ar.234 of Gniesmer, took off from Lonate, was attacked and strafed over the Bologna’s South-East Area by two Mustang of the 2nd Fighter Squadron of the USAAF’s 52nd Fighter Group, piloted by the Lieutenants Hall III and Cooper. Gniesmer, with an engine in flames, bailed out hitting the tail of his planes. Landed beyond the German lines and seriously wounded (skull’s fracture), Gniesmer was hospitalized at Ferrara, but died two days later. The plane glided to Comacchio’s Valley and crashed 10 miles NW Alfonsine.

The second Arado lost, but not in combat, was the aircraft of the same Sommer, at Campofornido on 20 April 1945, when, because the failed exit of the principal landing gear, the pilot landed with only the nose wheels extended hitting, because the strong wind abeam and the breakdown of the nose wheel, the terrain. The pilot escaped unhurt, but the aircraft burst into flames and was completely destroyed. Sommer flew the last missions, 22 or 24 April 1945, over the Po river with the Arnold’s plane, the T9+FH which, transferred at Holzkirken after the collapse of the German forces in Italy, was blow up on 30 April 1945.Victor Sierra.

Although there is no direct mission reports for Loah flying one of the first Jet Bombers, there is a clear indication that indeed he did fly or act as an observer in an Ar234, according to his Soldbuch he was issued flying clothes for high altitude, such as wool flying boots and flying jacket, a pilots silk neck scarf and a some other items.

Very informative online reference to both Kommandos, and even mentions Loah a few times!

Page 1 & 24 – Oberleutnant Erich Sommer (DKiG) – Jet Bomber Pilot and Staffel Commander, below the home movies of Sommer. Sommer flew the first recon flight in a Jet Plane, he survived the war and passed away in Australia.

Its seems that according to the Soldbuch pages 1 & 23 – they were replaced due to “Enemy actions”, although Pilots were not officially allowed to carry their Soldbuchs on flights, this is a rather nice entry and the signatures of Sommer only give this Soldbuch an extra bit of interest. Also Loah has made his own protective cover to the Soldbuch, it is not glued to the picture.

According to the Luftwaffe Officer Career Summaries:

An exceptional Soldbuch, it is the first I have seen to espionage related missions, Loah was extremely skilled pilot and observer, it would seem that he took part in at least two spy missions over the USSR before the war broke out. Later he would fly some of the rarest planes the Luftwaffe had, later even taking partial command of a AR234 unit, which was the first Jet Bomber in existence. Loah is mentioned in book, magazines and on the Internet in various blogs and forums, there is even models of the planes he flew (and crashed!). It could be that there is further research that could be added to this story, if it was possible to see his Flugbuch which is owned by an archive.