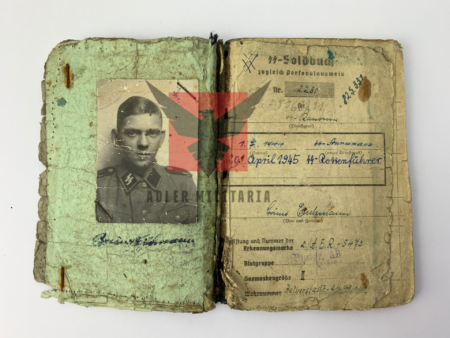 Opened 15th of October 1942 – in München with the SS Art. Ers.Regt (Signed by SS Hauptsturmführer).

Eichmann spent the Christmas of 1942 at home on leave.

‘’During the battles on the Russian Front the regiment’s artillery equipment was constantly upgraded. One of the artillery batteries was equipped from 1943 with Wespe and Hummel self-propelled guns and later with Nebelwerfer rocket launchers that gave the regiment its tremendous firepower. Especially during the difficult defensive battles in the winter of 1943-1944 in the Ukraine, every artillery piece a whether a heavy field howitzer, or 15cm rocket launcher a was often used at such close range that it was fired with barrels in a horizontal position. The battery was later attached to the reconnaissance unit in the vanguard of the LAH and experienced the hardest battles while using “Panzermeyer tactics” that required rapid marches and lightning fast deployment into firing positions.’’ T.Fischer

On the 19th of January 1943, Eichmann arrives and is issued his equipment, including extra equipment such as a Zeltbahn Tent, Backpack and Blanket. On the 25.1.1943 he was issued his final items: Special Clothing, he was number 120 to get full winter kit issue, including boots.

Arriving at the front in late January 1943, the LSSAH was engaged in fighting in and around Kharkov as a part of Hausser’s SS Panzer Corps.

Eichmann arrived at a motorised field hospital on the 14.2.1943 and was sent behind the lines. Arriving in the Reserve Laz (Hospital) Deutsch Krone 9 days later (Over Krakau). He was reported to have: Code 33 – Freezing Wounds. He would spend till 14.5.1943 in hospital recovering.

Eichmann was granted leave home for recovery on the 29.5.1943, arriving at his replacement unit 10./SS-Art.Ers.Rgt in München.

Eichamann was back on the frontline again with his old 12th Batterie, Pz.Art.Rgt LSSAH on the 14.6.1943.

Operation ”Citadel” : The division was deployed in the Belgorod-Tomarowka area at the end of June (beginning of attack 05.07.). Attack towards Oboyan. Fighting at Berezov, Jakolevo, Pokrovka and tank battle at Prokhorovka.
After discontinuing the offensive, the division moved to the room Isjum and was from 28.07. transported to Italy.

Eichamann received once again 20.9.1943 – Special items such as new shoes and a great coat.

1944 – Offensive and defensive battles on the approaches of Zhitomir-Kiev (Brusiloff) and in the area Radomysh-Chernyakhov. Retreat battles over Sorokov, the Teterev, over Chepovichi and Chudnov in the area Berdichev-Ljubar (Krasnopol, Ivanopol).
Attacking battles east of Vinnitsa and with parts in the Uman area in the direction of Korssun (relief attack against the Cherkassy basin).
Use in the area south Jampol. Defense and retreat battles at Basilija-Kupel, at Fridrichovka and in the area north of Satanow (Tarnopol fighting area).
After the retreat battles in the “Wandering Hube-Kessel of the 1st Panzer Army”, the division was removed at the end of March and transported away to the west (refreshment in the area Turnhout north-east Antwerp).

On the 1st of April 1944, Eichmann arrives at a Reserve Hospital with a Grenade Splinter in his left buttock, four days later he is sent to a Hospital in Payersbach. Eichmann was awarded the Black Wounds Badge (14.4.1944) on the 23rd of April he is sent on leave home to rest till 22.4.1944. By the 25th

It seems that during this time Eichmann was injured:

The majority of the LSSAH, which amounted to 41 officers and 1,188 men, were withdrawn to Belgium for rest and refit, however a Kampfgruppe was left behind. On 25 March, the 1st Panzer Army was encircled in the Kamenets-Podolsky pocket. The battle group took part in the fighting to escape the encirclement, forming a part of the spearhead which linked up with the II SS Panzer Corps near Buczacz on 6 April. The LSSAH Division was reformed in Belgium and was at full strength by 25 April 1944.

According to the last unit entries in Eichmanns’ Soldbuch, he served in all first three Batteries from through to the wars end in May 1945.

Unit commanded by SS Sturmbahnführer Urbanitz, the unit was armed with the first two Batteries with 10.5cm ‘Wespe’, and the third Batterie with 15cm Self Propelled artillery ‘Hummel’.

September 1944 for Eichmann was calm, back at his replacement unit. Far away from the western front in Olmütz. He was lucky to have made it out of Normandy, many were killed or captured from his original unit.

After a refresh in the Bremen area the Division in October 1944, they were ordered to the Eifel region for the coming offensive. (Eichmann received a new K98 rifle) in October just before leaving Köln. The Division was split into four different Kampfgruppen, with an advance line towards Elsenborn-Kamm. On the 16 December they successfully attacked Losheim-Rocherath-Krinkelt. On the 18th reaching Büttgenbach. 19th till the 22nd further to Ourthe Area went into action on the north flank at Bastogne. By the 1st January, they form a part of the circle around Bastogne. They moved back on the 18th of January, over St Vith. Then left the frontline reaching Köln, ready for deployment to the Eastern Front.

The last wartime entry is a promotion to SS Rottenführer on the 20th of April 1945, with 1./Pz.Art.Reg12 (Signed off by a Stabsscharführer).

Hungary 1945 – ‘Operation Spring Awakening/Frühlingserwachen’ the Division was together with the LSSAH and sent to Hungary under the 6th Panzer Army. During the offensive, fought around the Plattensee area against the Red Army. The operation was a disaster due to the muddy terrain and the hard Soviet attacks. By the 16th of March the Soviet Counterattack pushed the front towards Vienna, Austria. Vienna fell on the 13th of April, survivors of the Division retreated through Odenburg and Hirtenberg reaching Linz close to the US Army advance. On the 8th of May 1945, the remainder of the division (10,000 Soldiers) surrendered to the 65th Infantry Division US (7th Army)

Interestingly, Eichmann changed his next of kin to his new wife ‘Else’ he noted, ‘ entered in May 1945 in Larger 8, near Enns in American POW Camp.

This SS Soldbuch comes directly from Germany, and was not in a collection before, and remains in an untouched state. The Soldbuch was well worn, as can be expected from its long path across Europe and fighting on two fronts in all weather conditions! The addition of another cover, hiding the SS Runes on the cover (Can still be seen from the side). Eichmanns’ Soldbuch is well worn, and remains a silent witness to some of the most ferocious battles of World War Two in his SS Tunic Pocket. Picture is period applied and the SS Soldbuch is not missing any pages. A very rare example of a LSSAH & HJ Division Soldbuch, these are very rare today and are highly collectable. Attached to the outside of the SS Soldbuch is Eichmanns’ Wounds Badge in Black.