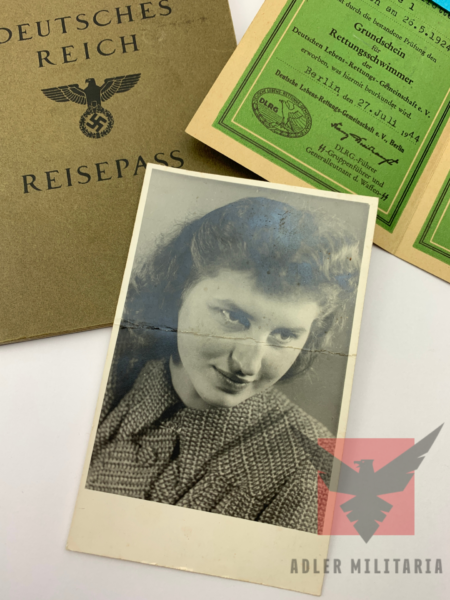 Grouping to a Berlin Student Berlin 1945

1. Third Reich Passport ‘Reisepass’ – Berliner Student Rosmarie K resident in Berlin Charlottenburg. Issued by the Police of Berlin.  124. Polizeirevier on the 27th of June 1933. Period Attached Photograph. One Entry: To Helsinki in 1938.
2. DLRG Life Saver Swimmer Pass – On the rear of the card in German is the test that must be passed. Original Period Applied Photo. Issued by the Hochschule Inst für Leibesübungen, Berlin on the 27th of July 1944. Under the direction of: DLRG-Führer Franz Breithaupt SS -Obergruppenführer und Generalleutnant d. Waffen SS. (Breithaupt was Commander for some time of the SS Court Main Office and was shot by his SS Aide Karl Lang on the 29th of April 1945).
3. Portrait of Rosmaire K. Rear: Rose, Christmas 1945 in Berlin Charlottenburg after the Battle of Berlin.
Interesting little grouping to a civilian who made it through the war in Berlin, and its aftermath in 1945.
Free shipping to Europe & America
Categories: Documents - Soldbuch, Wehrpass, Urkunde, IDs, Photos, Shop