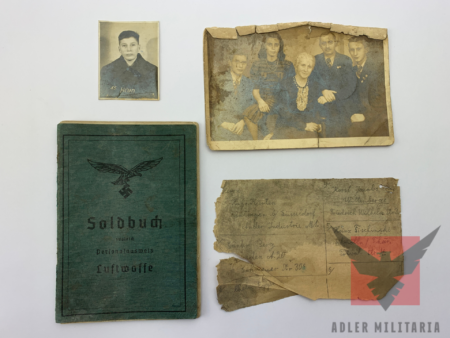 Born on the 24th of September 1928 into a Catholic family in Steinseiffen (W.B.K Neustrelitz)
The Soldbuch was issued by the Major Commanding the Schw.Flak.Ersatz Abteilung 60 in Wismar, on 05.01.1945.
Hain was only 16 years old, when he was sent to join his combat unit.
Leichte Flak Abteilung 755 (o)
In January 1945 the unit was stationed in the Hamburg area under command of Flak Regiment 66 (3.Flak.Div).
According to the Lexicon der Wehrmacht: Units of the Division were thrown into combat against the advancing allied units in April 1945, finally surrendering on the 3rd of May
See: http://www.lexikon-der-wehrmacht.de/Gliederungen/FlakAbteilungenleicht/lFA755.htm
A book by veteran of the same Batterie as Hain wrote a book detailing his duty in the Batterie.

Also worth noting, that the 1.Batterie of Hains Flak unit are mentioned in  „Der Freiwillige“, 8/1978 it seems they were all killed in a senseless action in April 1945.

A very interesting Soldbuch to a ‘Child Soldier’ in the final days of the Third Reich. Condition is not the best, but all entries can be read. The picture was pulled on one corner ripping it, but there was a spare one inside the Soldbuch identical to Hains in the Soldbuch.