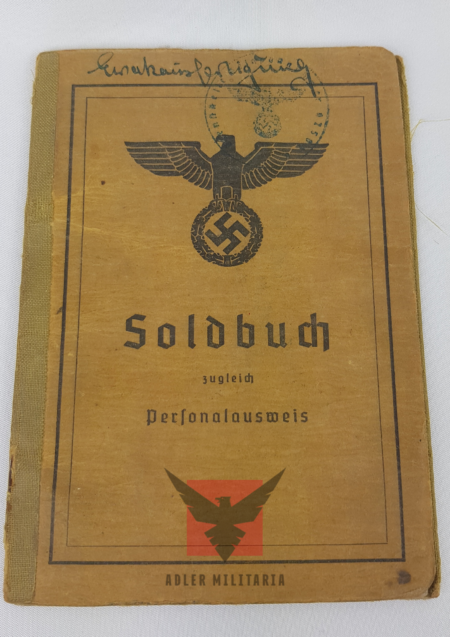 This is a replacement soldbuch for an Obergefreiter Paul Nothers. This NCO served in both the Eastern front and against the US forces in the Ardennes offensive.

Summary of the Unit.

The Artillery Regiment 139 was on 10 July 1942 at the military training area Elsenborn, set up in the Wehrkreis VI. For installation, Valkyrie II units of the Wehrkreise IV, VI and IX were used. The regiment was subordinated to the formation of the 39th Infantry Division. The regiment was dissolved along with the division in November 1943 in southern Russia. The regimental staff then formed in the General Staff, the regimental staff of the Artillery Regiment 357 of the 357th Infantry Division. The I. Department remained in southern Russia and formed there the III. Department of Artillery Regiment 282 of the 282nd Infantry Division. The III. The regiment’s division was renamed heavy artillery division (mot) III / 139 and thus an army unit. The department was reinforced by the previous 6th battery, as the new 9th battery. At the beginning of January 1944, the unit was deployed to the 8th Army in the Kirovograd area. For the Ardennes offensive, the department was subordinate to the LXXIV. Army Corps at the 15th Army in the west. Most recently, the department was used in the spring of 1945 in Silesia.

On page 24 of the Soldbuch, it is evident this soldier finished the war as a prisoner of war and went into French captivity. He was sent to  POW camp number 142, and his POW number 410889.

Free Shipping within the USA and Europe!