Wohlgemuth was born on the 4th of July 1922, and was trained as a salesman.

Interestingly he was an NSFK member, learning how to fly various glider aircraft, the NSFK Flugbuch details many flights, and it displays a very clear picture of him in the Hitler Jugend.

His Soldbuch was issued on the 19th of August 1941, after successful fighter pilot training with:

By August of 1944, Wohlgemuth was a trusted fighter pilot and was assigned for a very short time to:

The formation order for the Jagdgeschwader Süd goes back to the beginning of summer 1943. The squadron should not be a “normal” squadron association, but a special association to combat the British Mosquito aircraft flying in at high altitudes. The squadron should only have a strength of 20 machines, so only as strong as half a day-hunting group. The installation began on June 1, 1943 in Wiesbaden-Erbenheim, the group was equipped with the Messerschmitt Bf 109 G-5.

On the 24th of August 1944, Wohlgemuth arrived at his final frontline unit.

This was equipped with the Messerschmitt Bf 109 G and was then used in the Reich Air Defense. In September 1944, the group began to be converted to the Messerschmitt Bf 109 K. Wohlgemuth took to the skies on the 11th of September 1944 to intercept US Bombers, when they met the aircraft of the 55th Fighter Group. During the aerial combat Wohlgemuth was extremely lucky to have survived his aircraft getting shot down, although as he made an escape from the aircraft and was rescued, he lost his left arm due to the wounds. Seen below the pictures of the others from JG 4 that were not lucky to survive.

Parts of his aircraft that came down over Craiwinkel on display in the JG Exhibition, of which some can be seen online.

Some information can be found in the following book:

“Courtesies of the Heart” – By Kenneth Breaux¨

Wohlgemuth gave interviews to the author and gave his recollections. 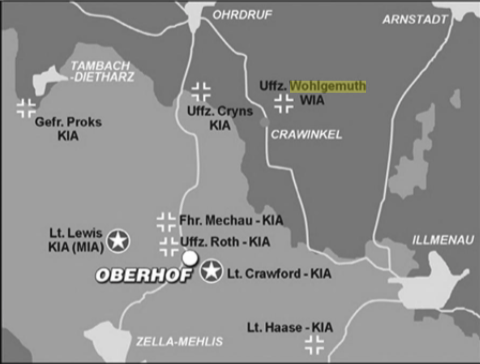 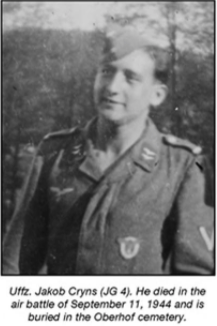 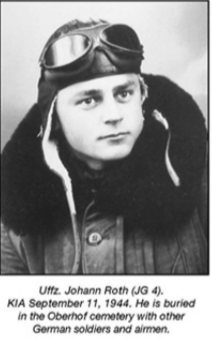 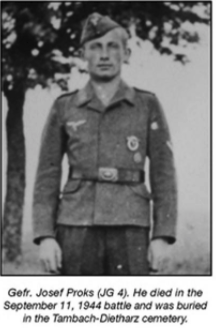 Wohlgemuth was awarded the following medals/licenses:

Interestingly, according to Wolhgemuths Pilot License he was allowed to fly the following aircraft.

An interesting Grouping to a named pilot, who seems to have flown even as an old man up to 1993. Wohlgemuth is well recorded as are details of the day his plane was shot down. A very nice grouping to a very lucky fighter pilot.