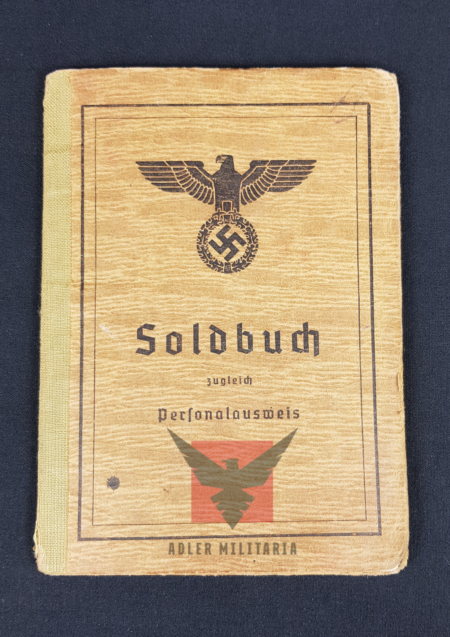 Soldbuch to a Panzer Grenadier in the Division Brandenburg.

A very good and clean condition Soldbuch with all pages issued without picture named to Franz Straka who from Vienna at the age of 18 at this late stage of the war joined the military and started his training in the Polish city of Guben with the elite Großdeutschland division.

We can see from his Soldbuch that in January 1945  he was at the 111 Ersatz-Ausbildung- Battalion Großdeutschland. (This was a training and replacement unit). He received a k98 Rifle and then went on to join the Panzer-Grenadier-Division Brandenburg as a fusilier and rifleman.

By end of February 1945, Franz and the Brandenburg division were involved in the defensive & retreating battles of Oberspreewald, Lausitz, and the Elbe-Elster where they were under command of the Panzerkorps Grossdeutschland.

In March 1945 along with 1. Fallschirm-Panzer-Division HG, the Kampfgruppe 20 Panzer Grenadier Division they were trying to stop the Soviet advance but were heavily reduced in combat capacity with the heavy loss of men and materials and had hardly any armor left. Their objective was to hold the Eastern bank of the river Oder while here Fanz was shot and seriously wounded, he was evacuated as can be seen from page 12 in his Soldbuch.

This was the end of the war for Franz but saved him from Russian capture, he spent some time in hospital as we can see from 11th of March to April the 3rd he was at a Reserve Lazarette 11 in Wurzburg.

On the 4th of April 1945 he received the Wound Badge in Black entered on page 22. Franz then goes on to another hospital Reserve Lazarette 111 Erlangen. While hospitalised Franz received his last military wage that was authorised by the Allies in January 1946.