Lorenz Weinzettl was born into a catholic farming family on the 20th of September 1922 in Germany.

Weinzettl was issued a Soldbuch on the 3rd of June 1941 with, Marine Artillerie Abteilung 512 in Tromso, Norway.

Although nothing of interest took place until 1944, Weinzettle was at some stage in late 1943 posted to Marine Artillerie Abteilung 608 in Brittany, on the island of Cézembre in the bay of St Malo.

It was here that Weinzettl would take part in the battles during the landings during DDay.

He was awarded the following awards when firing on the Allied Positions, and while hling out from large air bombardment even against Napalm bombing!

History of what happened at Cézembre in August and September of 1944.

Richard Seuss  led 650 men, including 200 artillerymen from the Italian navy belonging to the First Atlantic Marines Division 2 of the Italian Republican Navy and, according to some sources, 100 volunteer White Russians .

August 3, 1944, the 8th Army Corps of the United States , under the command of Major-General Troy H. Middleton reached Saint-Malo.

August 5 , the Americans completely surrounded the city, which capitulated on August 18. Only the island of Cézembre remains in German hands.

The island was then subjected to aerial attacks and intense bombardments from the 13th.

August 15th, Seuss received the Knight’s Cross of the Iron Cross , by decision of the Oberkommando der Marine .

The Cézembre garrison continued to resist, despite requests for surrender and artillery fire located on the Saint-Malo coast (especially from Dinan). After the surrender of Saint-Malo the August 19, Cézembre comes under the direct command of Admiral Friedrich Hüffmeier, the head of the German naval forces in the occupied Channel Islands .

The latter forbids Seuss to surrender and urges him to fight to the end. General Patton ordered a reinforcement of naval bombardments and air against the island. After a first raid carried out on August 30 by 75 USAAF bombers, Douglas A-20 Havoc and Martin B-26 Marauder, the next day there was a massive attack of 99 American bombers which dropped conventional bombs as well as napalm bombs, followed by 165 Halifax bombers and 5 Mosquito of the Royal Air Force.

At the end of the air attack, the English battleship HMS Warspite fires over 381 shells at the island.

After these bombings, the island was riddled with shell impacts and the drinking water reserve was destroyed. Admiral Hüffmeier launches an attempt to supply the garrison from Jersey, which fails due to bad weather. He then gives Seuss permission to surrender . 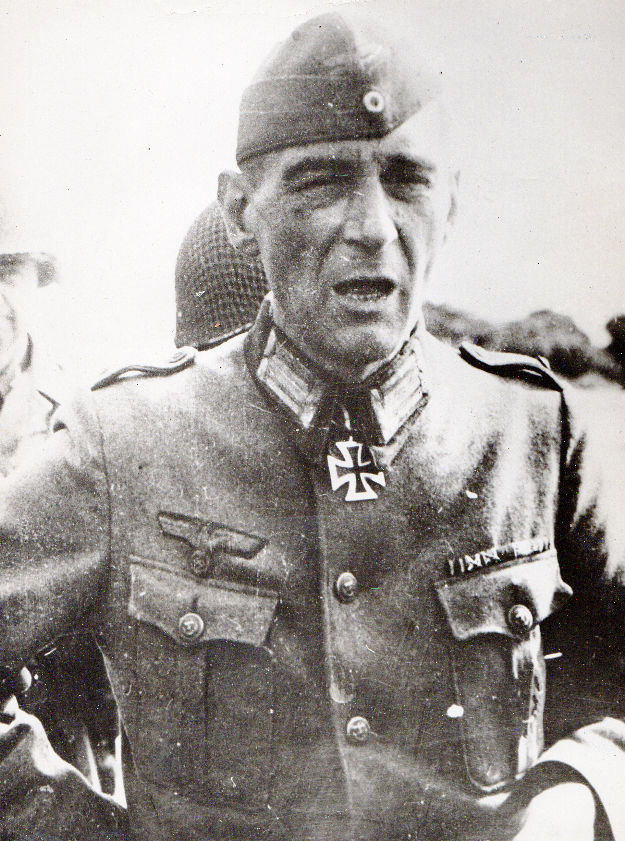 September 2, Richard Seuss (seen above on his capture)  is taken prisoner by the elements of the 83rd American Infantry Division which land on the island. Seuss received the oak leaves on the Knight’s Cross on September 2.

300 Wounded and 40 Soldiers would surrender at the end, Weinzettl was one of these men.

This is an incredible Soldbuch Grouping to a very brave young Marine Artillerie soldier who fought bravely, winning the Iron Cross First Class the day before they left they left island and entered a POW Camp.

Today the Island is off limits, and due to the nature of the bombing it was said to be the most bombed piece of ground in the whole war, also it was the first time Napalm was used.

Oberleutnant (M.A) Richard Seuss – His signature can be found throughout the Soldbuch!

Photos of the abandoned Island along with the relics of war can be seen here.

Included in the Grouping are the following items