Thiele was born in the Zwickau area of Germany on the 18th of January 1914. In His Civilian life he was a Technical drawer, married and living with his wife.

Soldbuch is a second issue, issued to Thiele at the : Schwere Artillerie Ersatz und Ausbildungs Abteilung (mot) 38 in November 1944.

From Normandy to Belgium

In June 1944 the division was in Normandy north of Liseux and thus exactly east of the Allied landing area. The division formed the westernmost division of the 15th Army. During June 6, 1944, Allied paratroopers jumped in the area of ​​the division, which had the task of securing the area east of the landing heads.

From mid-August 1944, this stretch of coast came within reach of the Allied units and the division had to intervene in the fighting. The units that were arriving were involved in the fighting to varying degrees up to August 20, 1944.

By early September 1944, the division was pushed back to the area south of Dunkirk and southeast of Boulogne. On the 5th September 1944, the not yet refreshed division had to withdraw to Courtrai. On September 10, 1944, the “Kampfgruppe 711 Infantry Division” was in the Oostsonbourg area, 3 km north of Vlissingen. On September 11th, the combat group marched off in the direction of Antwerp. It must have been here that Thiele was wounded for the 3rd time in his career.

On November 5, 1944, the division held a 9 km deep bridgehead south of the Meuse, 12 km north-northwest of Breda.  It would seem that the wounding was not so serious, and he was wounded once again now the fourth time on the 18th of November 1944.  Thile was awarded the Iron Cross First Class for his actions in November 1944.

Thiele was with: Heeres Artillerie Batterie 1092 , armed with a rare 12.8cm K44 Pak. It is highly likely that Thiele was a Batterie Commander. 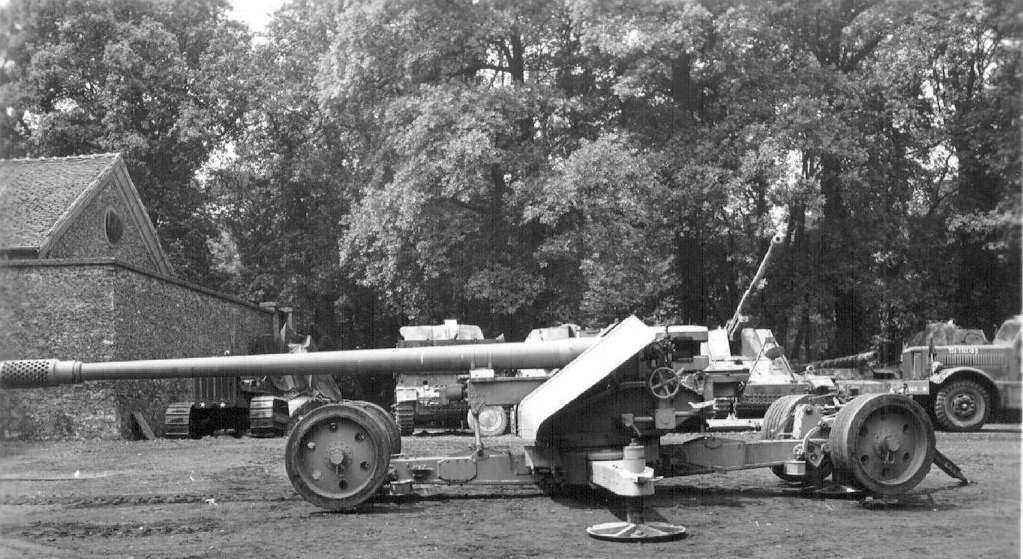 7th Army – Its role was to protect the southern flank of the Fifth Panzer Army and the entire Ardennes Offensive. Like the other two German armies in the offensive, the 7th Army took substantial losses. The 7th Army defended against the northward attack of the US 3rd Army, but ultimately failed to halt General George S. Patton‘s drive to Bastogne and Houffalize. The 7th Army, however, managed to avoid encirclement and retreated again to the Westwall.

It seems that Thiele was then wounded by shrapnel on December 22nd, 1945.

Thiele would on his release from hospital join the:

Thiele was once again posted to an artillery unit, and was once again wounded by shrapnel. His unit was involved in actions between March 23 and 27, 1945, the army took part in the defense against the Allied Operation “Plunder” and was unable to prevent the Allied units from crossing the Rhine.

Thiele was then sent to a hospital in Zwickau, and on the 15th of April 1945 he was on the way to his hometown, to check in at the hospital.

According to his family a strange event took place, when he was mistaken for a war criminal due to his name, he was handed over by Soviets to the US Army. This story is also recorded in a book: “Gardelegen Holocaust –  By Torsten Haarseim” –

It was reported on the 16th of April in the New York Times that the war criminal was found, although they had the wrong man. They had arrested the wrong Thiele.

His grandson wrote this on a German Forum:

“My grandpa didn’t tell much about the war. My great aunt said that he suddenly cried out at night and got up drenched in sweat. But rather came from captivity. A few days before the surrender he was at home in full gear (Werdau near Plauen). I assume that his unit was wiped out or surrendered. There he then hid until he reported to a Russian commandant’s office, where he was first taken into Russian captivity. Now that’s a bit strange. This is what my grandpa told his sister-in-law shortly before he died (my great aunt). My grandpa was extradited to the Americans because they were looking for someone from the SS who had the same name as my grandpa. He came to Dachau, there it was probably to be interrogated (from which the nightmares came). He was probably only able to stay afloat because he repaired American shoes from old tires. It must have been around 1951 when he was released from captivity. When he arrived in Berlin he found his wife in Berlin Tempelhof, from there he went by plane to Frankfurt and by bus to Sachsenheim (near Bietigheim – Bissingen). There he got an apartment and worked. My father told me that my grandfather had a lot of pictures from the Eastern campaign, probably also interesting ones through the telescopic sight, inquiries with the relatives did not yield anything. I must have some at home and want to have no idea. But I think you know such problems, if not you can be happy. I was able to save something. As you can see, he was technically gifted, this beautiful box is now 40-50 years old. Alt. He died in 1997 at the age of 81. “

Thiele seen the whole war through, fighting on both fronts he was wounded around for times. He won many medals, including the Close Combat Clasp, and Iron Cross. Thiele took part in many of the most sought after battles. A very desirable Soldbuch, to a combat experienced officer.

Note: I have placed this Soldbuch grouping on Hold, in order for the family to buy it as they were looking for this Soldbuch. If they dont get back to us in four weeks we will have to sell this. If you’re interested send us an email.