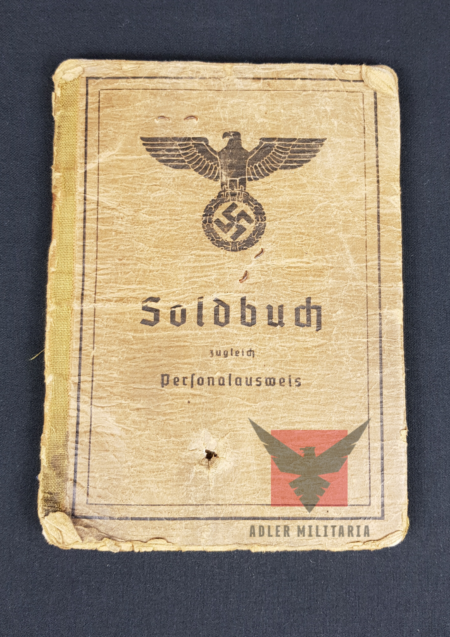 Soldbuch with bullet entry for a member of the Brandenburg Division in 1945.

Soldbuch issued with photo to Corporal Ludwig Walle in 1941 as can be seen on the opening pages, this soldier was well-traveled. After completion of his military training he initially joined a construction battalion attached to the 18th army and in June of 1941 participated in Operation Barbarossa with army group North.

He was sent to take the Baltic states and after crossing the Neva River saw engagements at Ilmen and the Lagoda Lakes as well as fighting at the town of Volchov on the way to Leningrad which saw him earn his Russian front medal as can be seen on page 22 within the Soldbuch. In December he received a gift from the 'Führer', a Führerpaket.

1943 Ludwig was transferred to Generalkommando v11 Army Korps that was first under command of Army Group Center then transferred to the command of Army Group South after the heavy losses of the battle of Kursk.  In November Ludwig yet again received a Führerpaket! In Spring 1944 he had to with his unit retreat to the town of Vinnista after heavy Soviet offensives, this led to his unit heading to the Romanian border. In August of that year, his unit was destroyed through heavy losses in both men and materials while still in Ukraine and officially dissolved on the 27th of September. Ludwig stayed in Ukraine fighting in the south before being moved onto Hungary, Czechoslovakia and then Germany. For his efforts, he won a war merit cross 2nd class with swords that was issued to him at the end of January in 1945.

In early 1945 Ludwig is then absorbed into the elite Brandenburg division, at that time he was with them for the defence of the Oder river against superior Soviet forces where the division along with the 1. Panzer Fallschirm Division 'HG' took heavy losses in both manpower and materials.

Ludwig loses his life on 26/05/1945 as can be seen from the Volksbund as he is listed as killed in action there, it is most likely that the bullet hole through the Soldbuch is the one that killed him since he is listed as KIA and yet here we have his Soldbuch that one of his fellow soldiers took from his body.

The division would try to escape the Soviets and surrender to American forces, some managed it however the majority surrendered to the Soviets in the Czech city of Brod.

This is a unique Soldbuch with a very sad story behind it.