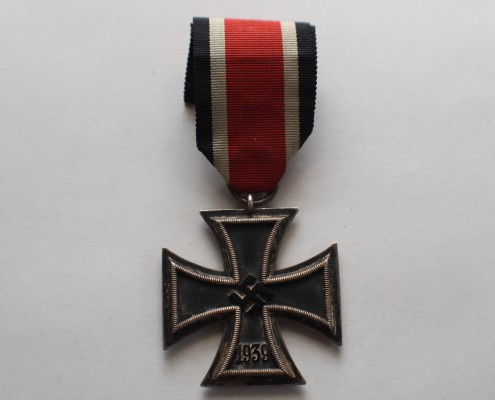 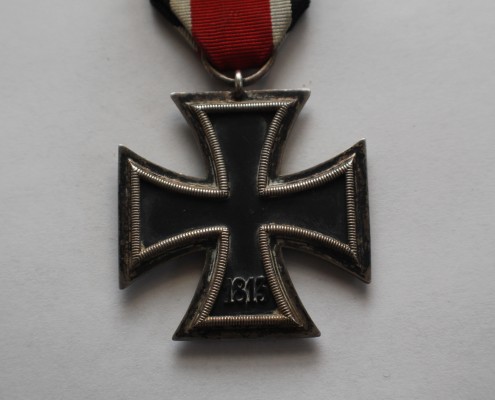 A nice example of a Iron Cross Second Class.

No maker mark visible, which is usually seen.

The Iron Cross Second Class held a certain level of prestige in the waning days of 1939; in war’s past, even this lowest grade had been stringently presented.   However, as the conflict entered advanced years, and certainly as the German infrastructure crumbled in 1945, this grade was given out with liberalism and therefore its reputation eroded accordingly.  In spite of this, the Iron Cross 2nd Class was a valued decoration and many recipients have proudly documented the deeds which earned them the right to wear it. The official criteria for the award was a single act of bravery in the face of the enemy, or actions that were clearly above and beyond the call of duty. Heer and SS personnel would receive the Cross for a successful action in which the soldier distinguished himself.  For example, Platoon commander SS Obersturmfuhrer Eric Brorup of the 5th SS Panzer Division was decorated on December 1, 1942 for leading a reconnaissance forest raid in the Eastern front during which a fire fight ensued. His platoon inflicted enemy casualties and brought back six prisoners, two of them NCOs.   It was not uncommon for an entire unit to receive the Iron Cross 2nd Class.  The entire crew of U-29 was decorated on September 18th in recognition of their sinking of the 22,500 aircraft carrier HMS Courageous on the previous day. (Description taken from Wehrmacht Awards Website).

Used condition to medium. A nice overall example of the famous Iron Cross!