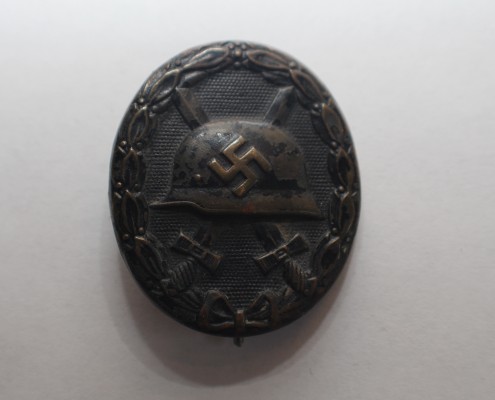 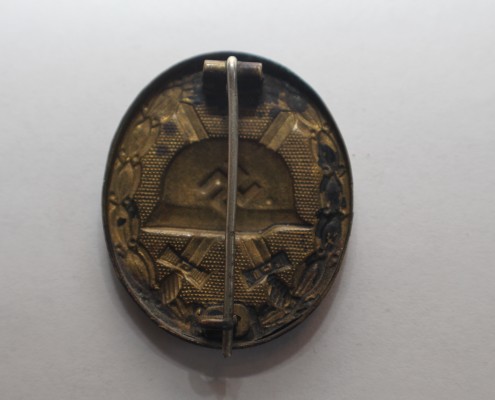 A nice example of a Black Wounds Badge.

No maker mark visible, which is not unusual.

Having closed the Condor Legion Wound Badge, Hitler reestablished the Wound Badges on the eve of World War II to recognize those individuals who were wounded in action with the enemy. The reinstitution decree stated that it was…

“..as a mark of honor for all risked their lives for the Fatherland and have been wounded or maimed.”

All members of the Armed Forces, Police units, and from 1943 on all civilians injured during allied air raids were eligible for the award.  Those individuals killed in action were posthumously awarded the gold grade, which was presented to the next of kin.  Because the World War I Wound Badges were still readily available at the time, these were initially once again modified by adding a swastika onto the helmet.  There are some differences between these and the Condor Legion Wound Badge, however, as the swastika is not as high, has rounder, softer edges, and is not flushed with the helmet.  These are referred to as “Spanish Type” or 1939 1st Type, but they are not to be confused with the Condor Legion Wound Badge.  Though only used temporarily until the new version became available, this type was presented as late as 1942. A few months after Operation Fall Weiss began the 1939 Wound Badge 2nd type was available and started to be presented.  This version, very similar to its predecessors, was oval with pebbling on the background plate and featured an M35 helmet with a mobile swastika on it.  Behind the helmet were the usual crossed swords, and a wreath of laurels surrounding the badge with a ribbon at the base.  There are slight variations in the measurements of the badges, but the 24 authorized manufacturers were mostly consistent in size.  The Wound badge was presented with a standard document and the appropriate annotations were made in the Soldbuch and Wehrpass. The black grade was stamped from sheet brass, later steel, and was painted mat or semi-mat. It has a hollow back with a needle pin.  They were rarely stamped (15-20%) with a makers mark, but if one was present it would be on the reverse.