Beganović was born into a farming family: 16.9.1909 in Kukujevci, Croatia (Today Serbia).

Beganović was a Bosnian Muslim, living in the facist controlled Croatia. He lived with his wife Magdela in Dakovo, Croatia.

Beganović was enlisted in the Waffen SS on the 22nd of June 1943, under the Kroatien SS Freiwilligen Division. 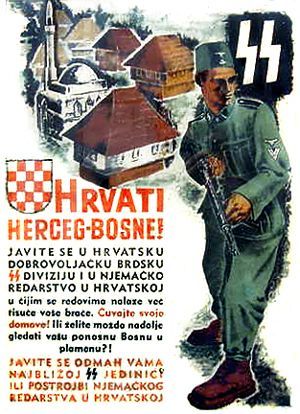 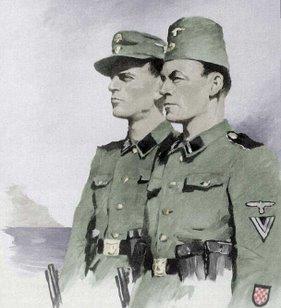 On the 27.11.1943 after training Beganović was sent to his frontline unit:

Brief synopsis of the Division

The 13. Waffen-Gebirgs-Division deer SS Handschar (kroatische Nr. 1) was formed to use Bosnian Muslims to defend their home region against the partisans and Chetnik forces, the members of the unit included supporters of the Albanian anti-communist organization Balli Kombëtar. Due to their islamic faith they were allowed Imams in the division. During the training in France, a minor mutiny occured in September 1943, but the training was completed and it returned home in February 1944. When the German forces retreated from this region in September 1944 many of the soldiers remained behind. The unit took on Germans from various smaller units in the Balkans and fought in Croatia and Hungary but was only brigade size. It surrendered to British forces near St. Veit an der Glan at the end of the war.

After the collapse of Italy, the situation in Bosnia deteriorated rapidly. German units had to be relocated there in order to disarm the Italian units and take over operational areas. In February 1944, Regiment 28 began to be relocated to the Bosnian area.

After the regiment arrived, it took part in Operation “Wegweiser” between March 9th and the 12th, 1944, during which partisans were combed out through the Bosut forest and a few villages north of the Sava. At the end of February 1944, Regiment 28 crossed the Save near Zupanja and entered Bosnian territory. Regiment 28 was able to reach Celic at the end of March 1944 after fighting with partisans. On April 11, 1944 the Operation “Osterei” started, Janja, Ugljevik and Priboj were to be conquered. Operation “Maibaum” lasted from April 26th to May 7th, 1944. Strong partisan units in the Majevica were supposed to be prevented from crossing the Drina to Serbia. Heavy fighting broke out in the course of which the partisans were prevented from crossing the Drina, but they were unsuccessful. On May 15, 1944, the division was renamed again, it was now called the 13th Waffen-Gebirgs-Division of the SS “Handschar” (Kroat. Nr. 1). On June 8, 1944, Operation “Vollmond” began, with which three partisan divisions located in the Posavina – Majevica area were to be crushed. The division was supposed to attack from the north and west and push the partisans back onto the Drina, with heavy fighting. From June 14th to August 6th, 1944 Operation “Kornblume” started, in which partisan groups north of the Save were attacked. At the beginning of September 1944, the division was relocated to the Vukovice – Osmaci – Srebrenica area to be refreshed here. At this time Beganović was promoted to SS Sturmmann. In September 1944 alone, over 2,000 men defected to the partisans! By taking over soldiers from the disbanded 23rd Waffen-Gebirgs-Division of the SS “Kama”, the division strength was at  346 Officers, 1,950 NCOs and 18,520 men. In mid-October 1944, the bulk of the division was marched into the Agram area in order to meet and relieve the LXIX Army Corps.  Here again around 1,000 men deserted. When the division was about to face Soviet troops for the first time, it largely disbanded. Only the German support personnel and a few teams remained, so that at the end of October the division had to retreat north across the Save.

The last entry in the Soldbuch was on 10.1944, it is unknown what happened to Beganović, he is not listed as killed in action nor missing in action. If he returned home, he certainly did not return home to peace, or did he see the war out to the end?

The remnants of the division were deployed in November 1944 in the Apatin and Batina areas. On November 12, 1944, the division was asked to hand over its heavy weapons to the 1st Mountain Division in order to be used as a combat group east of Fünfkirchen (Pecs) near Batina. They were pushed back to Hercöyszöllös with heavy losses. On November 29, 1944, opposing troops occupied Pécs. The remnants of the divisional combat group moved east of Bolmay into a new line. From here they marched to Barcs. Due to the Russian advance, the division first moved to the area south of Lake Balaton (Csurgo – Berzencze – Nagykanizsa and from there after heavy defensive battles to the Margarethen position between the Drava and Lake Balaton.

On March 6, 1945, the division took part in the “Spring Awakening” Offensive aimed at reaching the Danube at Baja, but the attack got stuck in the mud outside Kaposvar on March 7, 1945. On April 3rd, the division crossed the Mur and lost its heavy weapons. In the Kaag area the Reichsschutzstellung was taken. The division here received replacements from members of the Volkssturm and Luftwaffe. On May 5, 1945 the last Bosniaks were released so that they could make their way back to their homeland. The remainder of the division marched back and on May 7, 1945 moved to the Ursula position in the area around Kellersdorf. At Villach the remains were able to escape into British captivity.

Beganović was issued the regular uniform of an SS Soldier, but the interesting entry here is is the

Soldbuch Photo: Shows Beganović before he was given his SS Collar Tabs for the Division, likely during the training phase.

I have also a link for an English book on the division and the unit Beganović served in is mentioned often. 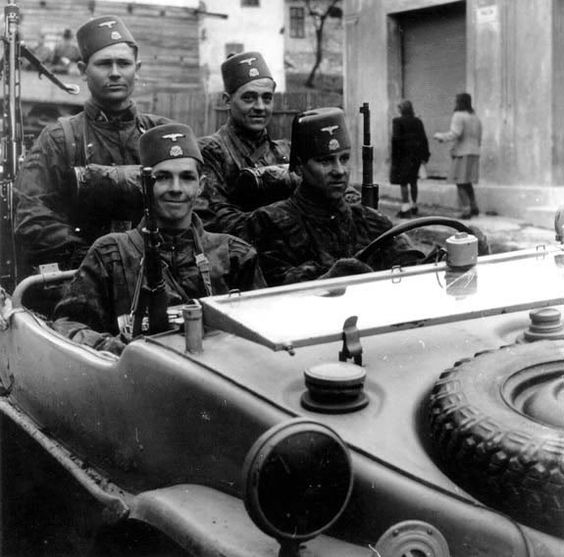